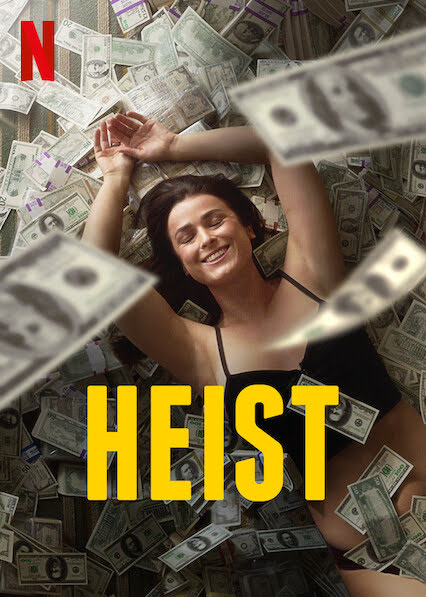 Heist is a 2021 American documentary series, directed by Derek Doneen, Martin Desmond Roe, and Nick Frew that releasing on July 14, 2021 on Netflix.

A 21-year-old woman steals millions in Vegas casino cash. An aspiring father swipes a fortune from the Miami airport… and uses TV shows to learn how to get away with it. A Kentucky dad is accused of one of the biggest bourbon burglaries in history. Using dynamic reenactments, original interviews, and a fast-paced style that fits perfectly into the cinematic canon alongside films like Ocean’s Eleven and Catch Me If You Can, directors Derek Doneen (The Price of Free), Martin Desmond Roe (Two Distant Strangers), and Nick Frew (We Are the Champions) each take the helm of a single heist, told over two episodes.

Viewers will see how the subjects select their targets, the meticulous planning that goes into the job, the sweet glory of success… and the boneheaded errors that lead investigators straight to the truth. The perpetrators sit down for in-depth, frequently emotional conversations, alongside family members, accomplices, and the law enforcement officers who eventually brought them to justice.

Stunning in their brazenness, occasionally comical in their simplicity, and brutally honest about the fact that crime doesn’t (usually) pay, these history-making heists provide enough action, adventure, heart, and drama to satisfy fans of true crime and Hollywood capers alike. They’ll leave audiences breathless by posing the question: What would you risk for the score of a lifetime?