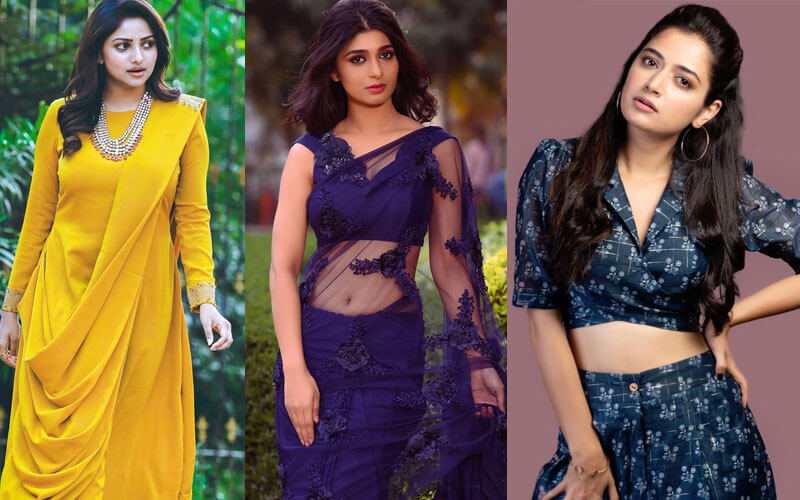 There is no way we can rank these talented and gorgeous women in any order. These beautiful actresses who made it big in the industry with their talent. Still, we have tried to collect the list of the top 10 Kannada Actress for you. This list relies on their performances in the year 2019 and also based on their social media status.

Even though she had no release in 2019, the actress keeps her fans engaged through her social media posts. She is one of the most searched Sandalwood actresses on Google. Ashika has a busy line up this year with Simple Suni’s Avatara Purusha, followed by Raymo, Garuda, Rangamandira and to name a few. She will also be shaking a leg in Kiccha Sudeep’s ‘Kotigobba 3’.

It could be an injustice if we would not add ‘Shyane Top Aagavle’ fame Aditi to the list of top Sandalwood actresses ;)… An engineer-turned-actress has appeared in several Kannada films in 2019 and has given stellar performances in all of her movies. The actress who also keeps her fans hooked with her jaw-dropping pics on Instagram.

Miss Supranational 2016, Srinidhi Shetty has wooed audiences with her performance in her debut film, ‘KGF -Chapter 1. Even though she had less screen space in the first movie, she gave her all out for her debut film. Touted to be a lucky lady in the industry, she will next be seen in two mega-budget films, KGF – Chapter 2 alongside Kannada superstar Yash and Cobra alongside Tamil superstar Vikram. Unlike other actresses, she keeps a very simple profile on her social media.

The list might be incomplete if we wouldn’t add Dimple Queen Rachita Ram. She is the first actress who has reached 1 million Instagram followers without stepping into other film industries.

She has been the talk of the town ever since she made her debut with two back-to-back films, Kiss and Bharate.

Shanvi Srivastava had two releases in 2019, one is Geetha alongside Ganesh and Avane Srimannarayana alongside Rakshit Shetty. Both movies have done well at the box-office. The actress will next be seen in ‘Ravichandra‘, directed by Om Prakash Rao.

Rashmika Mandanna is one actress in the south film industry, who is currently riding high in her career with back to back hits at the box office. She has proved her mettle in both Kannada and Telugu films. The actress will be making her Tamil debut in this year and has a busy line up with several big-budget films in Kannada, Telugu and Tamil.

Debuted in 2015 with ‘Kendasampige’, Manvita Harish has appeared in several Kannada films in past few years. An RJ-turned-actress lined up with a few Kannada projects such as Rajasthan Diaries, Rainbow and Shiva 143.

The Mangalore beauty has wooed audiences with her cute expressions and soothing voice. After ‘Naduve Antaravirali’ in 2018, she was last seen in ‘Nam Gani B.Com Pass’ which released in 2019.

The views, thoughts, and opinions expressed in the article have been curated for our audience and does not warrant a 100% accuracy. All the information mentioned in the article is subject to change according to the changing viewpoints.