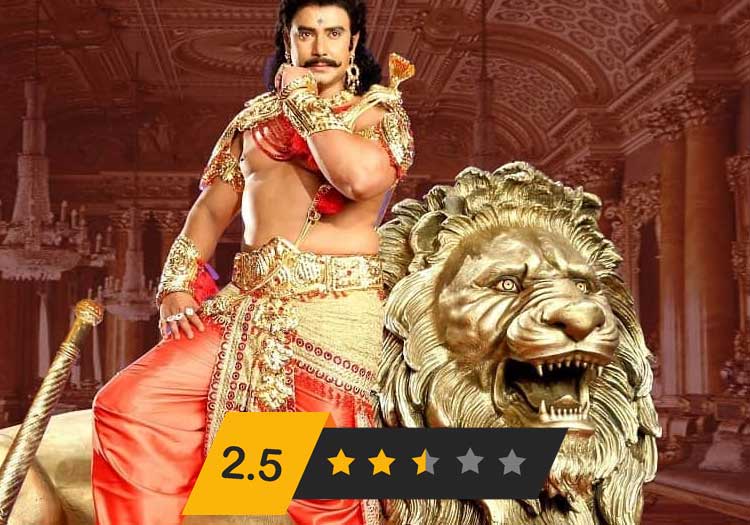 Kurukshetra is a 2019 mythological Kannada film directed by Naganna and produced by Munirathna. The film stars Darshan as Duryodhana, Arjun Sarja as Karna, Ambareesh as Bheesmacharya, Ravichandran as Krishna, Draupadi as Sneha(Suhasini Rajaram Naidu), Sonu Sood as Arjuna, Danish Akhtar as Bhima, Shashi Kumar as Dharmaraaya, Yashas Surya as Nakula, Chandan Manjunath as Sahadeva, Nikhil Gowda as Abhimanyu, Ravi Shankar as Shakuni, Bharati Vishnuvardhan as Kunti, Srinivas Murthi as Dronacharaya, Meghana Raj as Bhanumati, Hariprriya as Maaye, Ramesh Bhat as Vidura, Pragya Jaiswal as Rukmini, Aditi Arya as Uttara, Pavitra Lokesh as Subhadra, Srinath as Dritarashtra, Rockline Venkatesh as Shalya, Ravi Chetan as Dushasana and many other. The film is released on 9 August 2019.

What is it about?

This movie is an adaptation of Mahabharata and is based on legendary poet Ranna’s Gadhayuddha. The story told through the eyes of the Kaurava prince Duryodhana. The flawed hero is the protagonist of this film, where one gets to see how a brilliant warrior turns a victim of circumstances and people.

3D visuals and graphics have made significant roles in this movie. Without 3D visuals and graphics, the film would be very torturing. Acting of Arjun Sarja as Karna, Draupadi as Sneha, Srinivasa Murthy as Dronacharaya need to be appreciated. Darshan(Duryodhana)’s performance in the second half, Nikhil Gowda(Abhimanyu)’s commanding performance in the wartime, Danish Akhtar(Bhima)’s performance deserves mention. The second half of the movie is well made and executed.

The first half of the movie is too boring to watch. Dialogues delivery by some of the actors, including Darshan, are not up to the mark. Talks between the characters are not very intriguing. Overall, the movie could have been done better.

This movie is for the people who want to watch the mythological film and of course for the Darshan’s fans where they could see their favourite star playing the character of his lifetime and excelling in it.