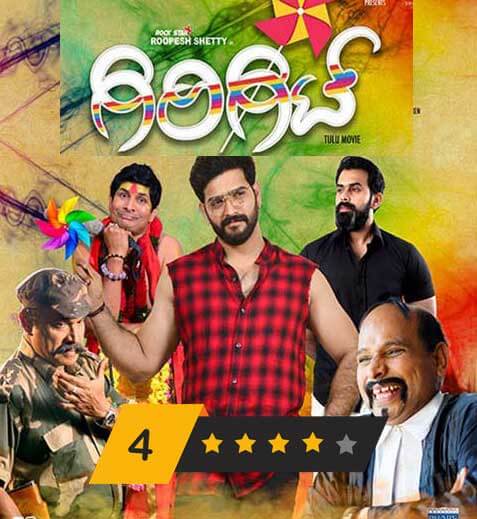 What is it about?

Girgit is a comedy entertainer, where a boy (Roopesh Shetty as Siddu) found a girl(Shilpa Shetty as Swati) in his dream. Apparently, he met that girl in real and situations made her fall in love with him too. But their love journey is not as easy as one can foresee. As the title mentioned, the story goes like a Girgit with non-stop comedy sequences.

The movie has non-stop comedy that will surely make you laugh until your jaws get hurts. From the begin to end, the comic opera makes you engage in the film. Probably, you won’t get bored throughout the film. The chemistry between the main leads Roopesh Shetty, and Shilpa Shetty is appreciable. And of course, we need to mention Arvind Bolar, Bhojaraj Vamanjoor, Navin D Padil, Sandeep Shetty Manibettu, Prasanna Shetty Bailoor, Umesh Mijar performances and comic timing. Furthermore, Coastalwood found a new young and energetic antagonist, Roshan Shetty.

Although the story is very simple, humorous make you hooked with the film. To be honest, this film has very little ‘does not work’ as the film doesn’t allow you to find an inaccuracy in it due to its non-stoppable funny dramas. However, the antagonist played by Roshan Shetty seems very soft natured, since he himself suggesting Roopesh Shetty(employer of his business) go out with his own sister to divert her mind and bring happiness in her.

If you were bored with recent non-laughable comedy movies and you eagerly waiting to laugh your heart out, this movie is for you.